This year beginning in 2021, Federation of Exchange Accommodators (FEA) has added a fourth class of members known as Life Members.  A Life Member shall be a former member retired from the profession and recognized by the FEA for their previous contributions to the organization and industry.

For 2021, the FEA Board of Directors unanimously approved to bestow the inaugural Life Member to the most deserving individual in the association, Suzanne Goldstein Baker, Esq., CES®, Executive Vice President and former General Counsel of Investment Property Exchange Services. 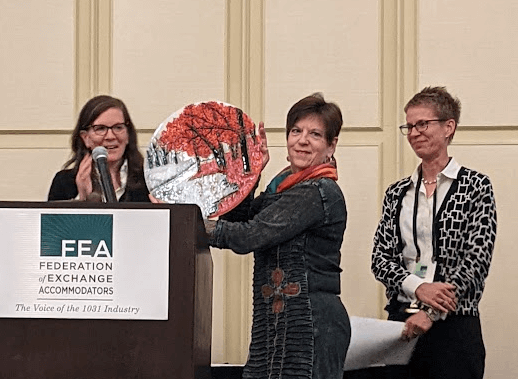 Suzanne joined the FEA Board in 2008, and served on the Executive Committee, Nominations Committee, and served as FEA President from 2011-2012.   She was honored with The Margo McDonnell Certified Exchange Specialist® Perpetual Award for Outstanding Service in 2014. She has twice received the President’s Award for her contributions to our government affairs efforts: in 2008 and in 2016.

Here is what colleagues in the FEA had to say about their choice of Suzanne for this award that illustrates how influential Suzanne’s work on behalf of the FEA has been:

As to the Government Affairs Committee Suzanne’s efforts in this area can only be described as herculean.  She has been the cornerstone of the Committee for 15 years. The FEA got to where it is today, largely due to Suzanne’s commitment and tenacity.

After meeting with former Congressman and Speaker Paul Ryan a handful of times in the lead-up to the 2017 Tax Cuts & Jobs Act. Speaker Ryan recognized Suzanne by sight and started calling her “the 1031 lady”.   It was Paul Ryan who suggested we produce some numbers to bolster our argument that restricting or repealing 1031 would be bad for the economy. Suzanne got to work and herded the cats – twice – seeking buy-in and support to underwrite the Ernst & Young study.  Her eagle eye for editing never failed as she found and corrected errors in the study.  She authored, edited, or reviewed nearly everything the FEA has produced in the last decade regarding legislative matters, not to mention writing articles for Tax Notes and other publications. She probably couldn’t even begin to count the number of flights she’s taken from Chicago to DC, nor the sheer number of meetings she attended on Capitol Hill representing the FEA.

Suzanne also successfully built and nurtured relationships with the members of the 1031 Real Estate Coalition – which is a coalition of the biggest names in real estate – the National Association of Realtors, NAREIT, The Real Estate Roundtable, to name just a few.  This was not an easy nut to crack.  We have a single issue and the other 20 or so trade associations have multiple issues they may be working at any given time. So getting their attention and sign-on to support our efforts to save 1031 was an incredible feat. Suzanne did that. Through her skillful relationship building, her advocacy and leadership.  She garnered the respect and esteem of the Coalition members and they now look to her – and the FEA – for anything related to Section 1031.

She has been a teacher, mentor, advisor and friend to many and we are extremely grateful for everything Suzanne has done to advance our cause.

Also, if you didn’t know, Suzanne is a lover of art, the great outdoors, and dogs!

About Investment Property Exchange Services, Inc. (IPX1031)
IPX1031 focuses solely on 1031 Tax Deferred Exchanges. IPX1031 goes beyond the ordinary to deliver exceptional customer service and achievement of client 1031 goals and objectives. Strength and stability backed with financial security, legal and industry expertise and a client-centric approach to high quality and proactive service positions IPX1031 as the national leader in 1031 Exchange services.
IPX1031 is also the leading voice of 1031 companies working with its industry association, the Federation of Exchange Accommodators (FEA), on critical legislative issues affecting the 1031 exchange industry and U.S. economy. More information about IPX1031 can be found at www.ipx1031.com.